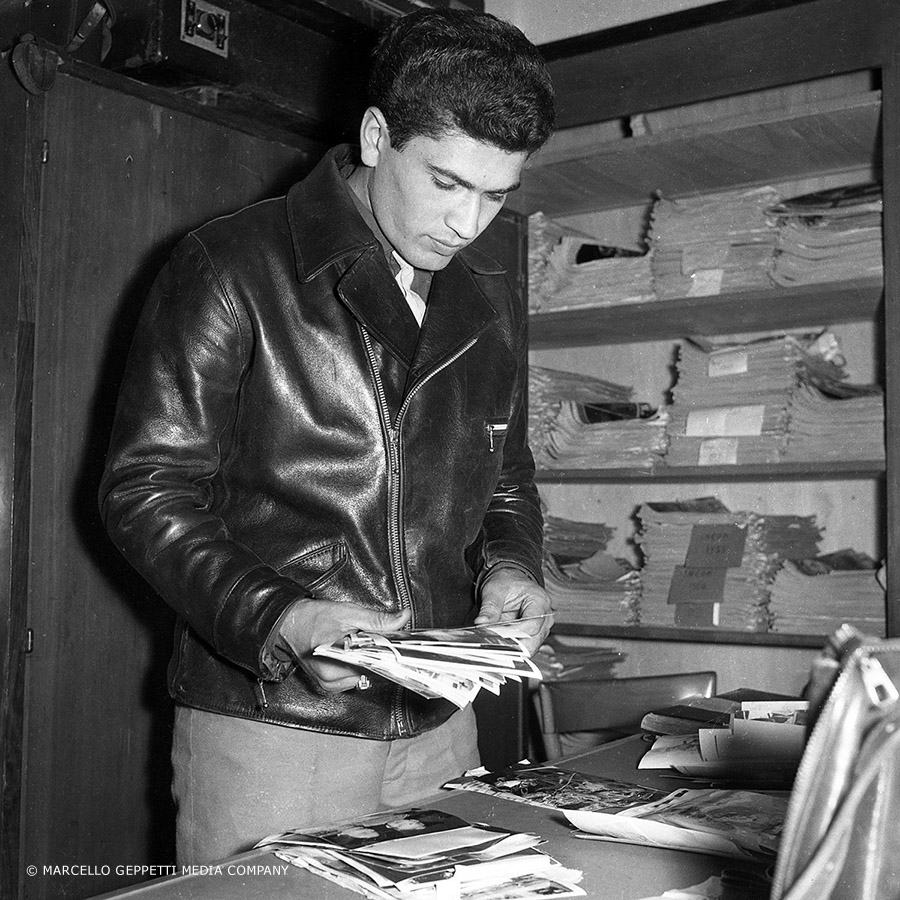 Marcello Geppetti was born in Rieti, near Rome, in 1933. Since he was young, he started to cultivate his passion for images and to elaborate his personal point of view of events.

He began to present his works to newspapers and news agencies, getting more and more appreciated, not only for the quality of his photos, but also for his talent in photoreportage.

The first steps Geppetti made were in the Giuliani and Rocca agency. Then he moved on to the service of Meldolesi-Canestrelli-Bozzer, one of the most important agencies of the 1950s and 1960s.

Those incredible and desperate photos of women who let themselves fall into the void during the fire of the Hotel Ambasciatori in the heart of Rome, in via Veneto, date back to those times. It was only chance that made Geppetti pass from there and take those shots. His photos went around the world for their journalistic strength and their drama. For the first time in Italy, questions about ethics and images were asked. Back then, Geppetti was excommunicated via the press by the Osservatore Romano and defended himself intervening in a series of articles in which he was interviewed.

He was among that group of photographers – and he is, in all probability, the most stormy – that inspired Federico Fellini to create the figure of the “Paparazzo” in the movie “La Dolce Vita” of 1960.

The period of the Dolce Vita was the most profitable for the photographer’s activity: Rome turned out to be an open-air set, international stars circulated through its streets and Marcello Geppetti took photos that made history, such as the kiss in Ischia that revealed the love story between Liz Taylor and Richard Burton.

The activity of being employee of agencies was becoming too tight for Geppetti, so he began to work as a freelance, also starting a collaboration that will last more than ten years with “Momento Sera”, one of the most important Italian newspapers of the time. In 1977 he decided to refound the R.A.F., the agency he had created for the first time in the years of the Dolce Vita. After collaborating with some colleagues in the Reporters agency, in the first half of the 1980s he created the Troupe, then Troupe News, where numerous photographers were trained.

On October 9th 1966 the AIRF (Italian Association of Photographer Reporters) was born and Marcello Geppetti, in addition to being part of the steering committee and being appointed treasurer, was one of the pillars of the Association, the one who fights together with his colleagues for rights of photojournalists and to obtain their photographers’s card. This historic goal was achieved in 1977.

His photographic activity continued unceasingly even in the following decades when he took poignant and emblematic testimonies of the “years of lead”, when he engaged in travels on film sets, or in his famous sports photos. Working in all areas of photo journalism, he became a symbolic and representative figure in Italy.

On February 27th 1998, he took his last click bequeathing more than a million photographs (ranging in every field of journalism), most of which unpublished. These pictures narrate a very long period of our life with artistic brushstrokes.

The value of his works

His works have a great documentary value, with unforgettable images that record the greatness of a fundamental historical period not only for Italian history. His name goes around the world: his images appear in “Time Magazine”, “Life”, “Vogue”, in the well-known book “Leg” by Donna Karan together with the greatest artists of photography and on the occasion of important exhibitions in various galleries in Rome, Milan, London, Lisbon, Sao Paulo, St. Petersburg, New York, San Francisco, St. Tropez, Bologna, Moscow, his images are sold at Sotheby’s and Christie’s auctions. The kiss in Ischia between Liz Taylor and Richard Burton and Anita Ekberg who assaults photographers with a bow and arrow are two shots that became part of the list, drawn up by ARTH 923 (a study of the University of Pennsylvania on art of the image), of the 28 most famous images in the history of pop art, where Geppetti’s name appears next to that of Andy Warhol and Cecil Beaton.

In 1997, in conjunction with an exhibition at the Robert Miller Gallery in New York, David Schonauer, the editor of “American Photo”, called him “the most underrated photographer in history”, adding that he created a new and unique style of immortalizing celebrities. Some articles in the New York Times and Newsweek compare him to Cartier-Bresson and Weegee. In 2009 Marcello had the honor of sharing with Weegee an exhibition at the De Lellis Gallery in New York, entitled “The Sweet Life / Shooting Stars”. The “New York Post”, in an article, places the famous kiss between Liz Taylor and Richard Burton in first place among the “7 most legendary Paparazzi photos”.

In 2010, Italy gave him correct recognition, choosing 120 of his most beautiful images to be exhibited at the Cinema Museum in Turin, to celebrate the 50th anniversary of the film “La Dolce Vita”.

In Rome, his city, a proposal was made to name a street of the Capital for him.